For the first time together, agriculture and industry have joined forces to enhance the Italian model of agri-food excellence. The new association was presented on the occasion of the 19th edition of Cibus, during the conference ” Filiera Italia is born: at the origin of Made in Italy for a better future of our country”. Among the promoters there are also OCRIM and the most famous brands of the Italian agrifood tradition in the world. 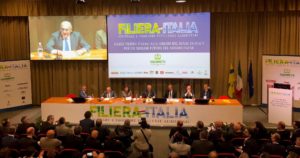 Cibus, the International Food Exhibition, as an accelerator of innovation, is the best frame to host the conference “Filiera Italia is born: at the origin of Made in Italy for a better future of our country”, which was held on the last 8th of May at the Pietro Barilla hall. This new and important task force is born in sign of the alliance between agricultural production and Italian industry, with the aim of promoting “conscious consumption”, based on the exclusive heritage of national agri-food excellence. The peculiarities of our territory, the know-how handed down from generation to generation, transparency and sustainability are the common values ​​that identify the Italian food model all over the world. A model based on the principles of the Mediterranean Diet, through the combination of all the ingredients useful for a healthy, varied, balanced, genuine and “good” diet. Defending this uniqueness is now the task of Filiera Italia, which has already committed itself to supporting national excellences in foreign markets, taking on issues such as European funds for agriculture, the increase in VAT rates and fighting the increasingly widespread “Italian sounding” and the so-called “traffic light labels”. As of today, exports have reached a value of 41 billion euros, while the fake Italian food is worth over 100 billion euros, as stated by Roberto Moncalvo, President of Coldiretti.

The promoters of Filiera Italia are well-known and appreciated in the Italian agri-food panorama: Coldiretti, Ferrero, Inalca/Cremonini, Consorzio Casalasco (Pomì e De Sica), Bonifiche Ferraresi, OCRIM, Farchioni Oli, Cirio agricola, Donna Fugata, Maccarese, OL.Ma, Giorgio Tesi Group, Terre Moretti (Bellavista) and Amenduni, “but as of today, we have been received 43 other membership requests”, said Luigi Scordamaglia, the CEO of Inalca and the Executive Director of Filiera Italia. During the conference, among other important speakers, Francesco Paolo Fulci (87 years old) an Italian diplomat and Italian Ambassador to the United Nations in retirement that currently serving as President of Ferrero S.p.A, intervened. Referring to the problem of Italian sounding and of the traffic light labels, he stated: “Italy can’t stand these abuses anymore”, citing the famous invective pronounced by Cicero against Catilina: “How long will you abuse our patience?”. Vincenzo Gesmundo, General Secretary of Coldiretti and Vice President of Filiera Italia, argued that Italy has to make a teamwork: “I’m not feel ashamed to say that the Filiera Italia was born out of interests, but for common interests. Filiera Italia also born out of the heart, born for the love that we have for our territory, for Italy in general, for Italian agriculture “.  On behalf of OCRIM, Alberto Antolini – CEO of OCRIM – is intervened to explain the presence of a metalworking company in Filiera Italia. “We are one of the most important players in the international milling sector. We feel an integral part of the Filiera Italia, because we share its values. It’s true that we are a metalworking company that produces machines and designs and realized milling plant, but our plants process one of the raw materials present in the Filiera Italia. We have given ourselves an ethic to make our products, in fact they are all made of food compatible materials. This is why we too feel like an injured party of this current international regulatory system, which equates our products to those made in countries without rules. “

THE “STAGIONI D’ITALIA”: FROM THE SEED TO STORE SHELF