Great participation of the annual meeting of the GLAO association (OCRIM older workers group) that has fallen on the 40th anniversary of its foundation. Stefano Mazzini, Commercial Director of OCRIM, has brought the corporate greetings. The photo, dated back to 1949, was shot in the courtyard of OCRIM and “adopted” by GLAO for symbolizing the group

A Bond That Goes Over The Work Relationship

It’s never easy to find oneself suddenly, from one day to the next, out of the work world and no longer be next to those colleagues with whom a long part of one’s life has been shared for eight hours a day. Maybe it was for this initial feeling of loss that, 40 years ago – on December 6, 1978 – a group of new OCRIM retired decided to found the OCRIM group older workers. A way to not permanently break off relationships, but mostly to give continuity to the strong emotional bond that has always seen them close to the company, even in the most difficult periods. Then that idea took more consistency and, after the period of adhesion to A.N.L.A. (Nation Association Of Old Workers) the group, which has always been supported by the OCRIM top management, became an independent association. Among the aims included in the statute, the article 4 states “the group intends to make available to the Management the moral forces of the Company elder workers to facilitate the human integration of the new young people employed in the company and to assist them in those activities that the Group itself considers fit to stimulate the spirit of Company “. An important point that fully coincides with the OCRIM philosophy that favors generational continuity, opening the doors to the children and grandchildren of older workers. To date, the Association has 170 members and the Board consists of 7 members still in business and 6 retired members.

The Celebration On Our Patron Saint

The annual meeting, that as usual takes place on the day of the patron saint of Cremona, started with the welcome speech of the GLAO President, Mr. Franco Schintu, that in OCRIM covered the role of Purchasing Director. This year the recurrence was particularly felt because is coincided with the 40th anniversary of group foundation. Stefano Mazzini, OCRIM Commercial Director, has brought the Top Management greetings and stated: “This is not the right place to list the goals achieved this year and those that we have set ourselves, but I want to say that this year OCRIM has been able to express its value, value that takes shape through tangible results and under everyone’s eyes. Certainly, the today outcomes are the sons of an important past, of which many of you bear the true witness”. Mazzini then addressed a particular thought to the President Primo Antolini, that recently passed away. The day began, as usual, with the ritual visit to the cemetery, in honour of Guido Grassi (OCRIM founder) and his daughter Mrs. Fausta who¸ during her 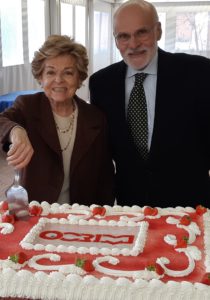 short life, was President and CEO of OCRIM. After the Mass and the lunch offered by the old workers group, with the significant contribution of the Company Management, the party ended with a collective toast, the cutting of the cake by Mr. Schintu and Mrs. Mirella Grassi, one of the four daughters of Recipient of the Order of Merit for Labour Guido Grassi and godmother of the party, and with the usual briscola competition. During the farewell greetings, gathering here and there the comments of the many members, it was nice to feel the sense of friendship that binds them and the satisfaction for a day spent together, without nostalgic notes, but with the pride of those who have contributed to the success of OCRIM and still belong to it.