Yesterday evening OCRIM wished a ‘Happy Christmas’ to its city with a concert that has created the enthusiasm of all the audience. The Gaga Symphony Orchestra, directed by maestro Simone Tonin, and the “A. Stradivari ” High School Musical choir. Classical, pop and dance music, interpreted with an unconventional spirit, has involved and excited the audience of the prestigious “A. Ponchielli” theatre of Cremona city. To all the friends of the blog, OCRIM offers the concert in streaming (http://www.ocrim.com/site/stream.html), with its best wishes for a Merry Christmas and a happy New Year. 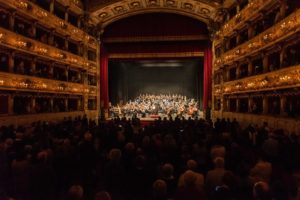 For a city like Cremona, known by many as the “world capital of the violin”, music is the most direct and engaging language to reach the heart of every citizen. Precisely to a concert, offered on the occasion of the upcoming holidays, it was entrusted the OCRIM’s wishes message to the city. The citizens responded warmly to the invitation and Tuesday, December 18 they were overwhelmed by the lively performances of the Gaga Symphony Orchestra. It performed on the stage of the prestigious “Ponchielli” theatre with sixty-six unleashed musicians under 30, united by the goal of bringing the audience closer to classical music. They knew how to combine symphonic, pop and dance music with originality that involved and aroused the enthusiasm of the whole audience. Many were the applause and the encore requests. The orchestra, hailing from Padova city, had made itself known by the television audience with the participation, in 2015, of the Italia’s Got Talent and, in 2017, of X-Factor. Yesterday, directed by maestro Simone Tonin, the orchestra proposed medley of evergreen songs ranging between different musical genres: from love songs to the cartoon theme songs from the ’70s – ‘ 80s- ‘90s, from pop Christmas songs to the famous Italian songs, shaken to the classic music of Gioacchino Rossini and the hits of 2018. Particularly contagious it was the energy and passion of Simone Tonin who has also “orchestrated” the audience with funny hand-clapping in rhythm of music. At the end, a thought of love for a special man was entrusted to the notes of the song “Circle of life”: a tribute to the President Primo Antolini, recently passed away. The Gaga Symphony Orchestra, in many performances, was flanked by the A. Stradivari ” High School Musical choir of Cremona that added emotions and solemnity to this magical evening. The choir, established in 2012 by prof. Pietro Triacchini, is composed of over forty students and their repertoire consists exclusively of sacred music, ranging from Renaissance polyphony to twentieth century literature. Once again art and industry got together for offering good music and fun, giving space to young musicians, professionals and amateurs, sharing the same passion and young age.

THE PAST BELONGS TO US. THE FUTURE WILL NOT BE A REPLICA, BUT WILL BE BETTER.