The “Tuscany project” of Bonifiche Ferraresi – Italy’s largest farm holding –  for the Valdichiana’s agri-food and tourism development, proceeds with a fast pace. Among the foreseen interventions, the restoration of 21 “Leopoldine” is already underway. “Leopoldine” are historic farmhouses in the province of Arezzo. 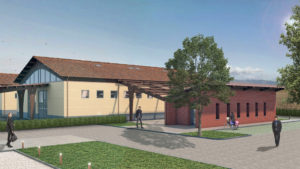 The attention to the territory, the socio-economic development, the impetus to the agri-food sector, the enhancement of Valdichiana’s traditions and identity are the central aspects of the company policies of Bonifiche Ferraresi, the Italy’s largest farm holding. With the “Tuscany Project”, Bonifiche Ferraresi has launched a plan of agricultural reorganization and redevelopment of all its real estate assets, to give the primary role back to the agro-industrial sector in the social and economic system of the Arezzo area. The project includes also the architectural restoration of 21 “Leopoldine”, prestigious historic buildings, typical of the agricultural tradition of the area, a project with great impact and social value that will bring these farmhouses back to their former glory.  “Leopoldine” were built during the process of reclamation and agricultural exploitation of the Valdichiana, between the first half of the 18th and the middle of the 19th century, thanks to the Grand Duke of Tuscany Pietro Leopoldo I of Lorraine (hence the origin of the “Leopoldine” name). The president of the Tuscany Region, Enrico Rossi, who attended the meeting on 19 January 2018 and had followed closely the project from the beginning, commented: “I believe a lot in the match that is playing this part of Tuscany, thanks above all to partners like Bonifiche Ferraresi, and also this restoration of Leopoldine is essential to give fully value to the framework in which this relaunch linked to agri-food is positioned “.

One Leopoldina For The New Administrative Centre. 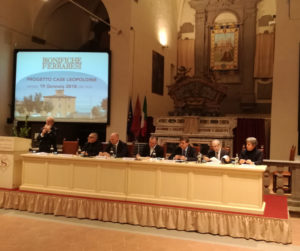 The “Leopoldine” will be destined to a national and international circuit of new structures for the Tuscan tourist market which, as is well known, knows how to combine the historical-cultural dimension with the eno-gastronomic one. The first two restorations are already underway and one of these properties (Podere “I Granai”) will host the new Bonifiche Ferraresi’s administrative centre which, in addition to the new offices and meeting areas, will also host the innovative research and processing laboratory dedicated to medicinal plants and an area reserved for the reception and tasting of the company’s products. During the presentation of the project, held at the San’Agostino Convention Centre of Cortona, the CEO of Bonifiche Ferraresi, Federico Vecchioni, stated that all the company’s properties have been conferred in a new company, called “Leopoldine S.p.a” because “through the creation of a distinct and dedicated corporate entity, endowed with specific professional skills, we underline once again the importance and the seriousness of our Tuscany Project “. At the meeting also attended Francesca Basanieri, the Mayor of Cortona, Mario Agnelli, the Mayor of Castiglion Fiorentino, Tulio Marcelli, The President of Coldiretti Tuscany, Luca Severini, Regional Director of ISP Tuscany-Umbria, Alberto Antolini, CEO of OCRIM spa, Paolo Tramonti, CEO of Bios Line, and Vittorio Moscatelli, CEO of IPI spa.