Last April 5th, at the Cinema Teatro FILO (Cremona), OCRIM presented the results obtained in 2017 to the financial, political and institutional world. Satisfaction with the economic and financial performances that show an EBITDA increase and growth in terms of employment. New important projects, partnerships, corporate acquisitions and innovative technological researches have given substance to the strategic plan based on the short supply chain and on the traceability of raw materials.

It was an intense day, which began in the morning with ” The Journey Home” film showing, offered by OCRIM to the students of the third grade of the Cremona city. Mrs. Maura Ruggeri, Vice Mayor of Cremona, and Mr. Alberto Antolini, OCRIM CEO, intervened, and the latter introduced the film with the video of the “Four candles” story (a message of peace, love and hope). 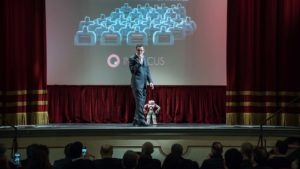 Among the numerous guests there were the Managing Director of Bonifiche Ferraresi, the President of the Consorzio Agrario of Cremona, the Milling Hub and OCRIM boards of directors, Pastificio Ghigi and Linea Group Holding delegates, some of OCRIM employees and numerous financial institutions. At 2.30 pm everything is ready to start the event. The Cinema Teatro FILO located in Cremona is crowded. Guests have taken their seats, the lights are lowered and … NAO, a robot of sixty centimetres, is on the stage. NAO is the expression of the OCRIM latest technology frontier, which hosts with its personal welcome to the audience and introducing Mr. Maurizio Galbignani, OCRIM General Director and speaker of the event. The controlled supply chain project, focused on the ITALIAN MADE concept, is the strategic fulcrum around which the first part of his speech develops. This is one of the most important projects developed in 2017 to guarantee the highest quality of the product, checking and validating the processes and overseeing the entire agri-food supply chain that the product – processed by OCRIM machinery – runs through. The recent agreement with Acciaieria Arvedi for the supply of raw materials in the Cremona area is an example of OCRIM strategy (see post published – http://ai-lati.it/2018/03/19/ocrim-arvedi-full-italian-made/); this is a concrete expression of traceability and common values such as identity with the territory, transparency and sustainability that only a short supply chain policy can offer. The foresight of Mr. Alberto and Mr. Sergio Antolini, the constructive commitment of all the company’s employees, the synergies and the partnerships born in the last years have led OCRIM to look beyond its “enclosure”, considerably broadening its range of action and achieving positive economic and financial results, as evidence of winning strategic choices. OCRIM in 2017 closed with a turnover of € 73 million and an EBITDA of € 14 million (in 2016 it was € 10 million), bringing the company to a net profit of over € 4 million. 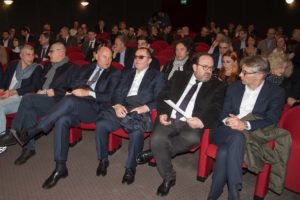 Maurizio Galbignani dwells on illustrating some of the new OCRIM projects, already all in progress that, in addition to investments related to new machine tools, also include the construction of the new structure intended for services at the OCRIM second site and a second 150 KW photovoltaic system, a sign of attention towards environmental sustainability.  The 2017 year was also characterized by important innovations in the field of technological research and external growth operations. Regarding the research, OCRIM realized innovative tools for the design of OCRIM plants (like the immersive virtual reality) and new technologies designed to improve food safety (titanium rolls, antimicrobial sieves and grinding wheels); concerning the external growth, in 2017 the acquisition of the FBC company based in Medesano (near Parma city) and specialized in handling systems, was completed. It was then presented the ongoing project: the futuristic Milling Hub, a project of considerable size, which involves the construction of complete milling plants at the OCRIM second site. Milling Hub S.p.A. proposes itself as a “local hub” for a better control of the territory, guaranteeing the traceability of the Italian raw material from the field to the finished product. At the end of the rich and dense afternoon Mr. Alberto Antolini, CEO of OCRIM, makes the final greetings, taking your leave of the guests by thanking his family and all the actors who have contributed and allowed OCRIM to be the important enterprise that is today.