Kalizea, one of the main European leading corn processing companies, opens in Romania thanks to the important agreement with OCRIM for the supply of a complete milling line for maize grits production (240T/24h capacity). The two important international companies have created a Strategic Technology Partnership that, thanks to the experience and innovative capacity of OCRIM, will strengthen the role of Kalizea, and of the Vivescia group in general to which it belongs, in the global agribusiness sector. 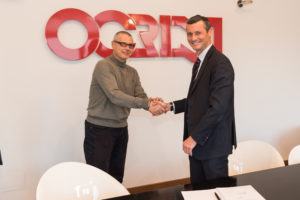 The OCRIM-Kalizea agreement made headlines: between the two international realities has been born a real partnership that goes well beyond the simple supply of a milling plant. Kalizea, a company of the French group Vivescia, specializes in the maize processing. The company has highly renowned in the world’s agri-food thanks to its ambition of creating, developing and making specific ingredients by means of a kind of maize processing basing on innovative tecnhnology. Kalizea works in three major corn production regions in France (Pringy), in Poland (Siechnice) and now in Romania (Slobozia) with a total milling capacity of nearly 200,000 tons. To equip the Slobozia site and keep its production standards high, it needed the most reliable partner, able to offer that mix of tradition, experience and innovation that could guarantee the Romanian headquarters the development of a true technological model. “it is an important vehicle to strengthen the position of Kalizea, and of Vivescia in general, in the agribusiness sector, thanks to its historical experience and expertise in the milling sector” stated Mr. Vincent Jacquot (Kalizea CEO) referring to OCRIM. Considering that Vivescia is one of the most important agri-food industries in the world (7.600 employees in 24 countries, generating a turnover of € 3.4 billion) and manages the supply chain from the field to fork, the motivations of this partnership are easily imaginable: “This plant has a double advantage: it will strengthen ties with European customers, offering them the same product quality in different countries; it will increase our export opportunities“, stated Mr. Charles L’Helgoualc’h, Kalizea’s CEO. The agreement was signed on January 18, 2017 at the OCRIM headquarters. Alberto Antolini, OCRIM CEO, commented: “OCRIM is honoured to have this new adventure with Kalizea because the collaboration between the two companies is a business model that is based not only on the professional integrity but also on a human relationship based on an honest synergy and mutual cooperation”. 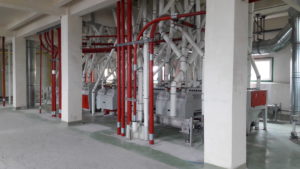 After the commissioning carried out at the end of May by our miller Sergio Manfredini, the new production site in Slobozia, in south-eastern Romania, is ready for production. The project consisted in the revamping and converting of old existing mill (200T/24h capacity) into a maize mill plant with dry degermination (240T/24h capacity). The OCRIM team was engaged in an exclusive project, integrating the plant with the supply of new machinery and the transformation/restoration of existing process machinery, coming from a plant near Bucharest, supplied 20 years ago by OCRIM. With the aim of making the plant highly efficient, the project has required a global intervention in all sections of the plant, from receipt of the raw material to the management of finished products. For the change of processed cereal, it was necessary to add a degermination and classification section as well as modify and expand the milling section, which represents the heart of the production. The result of milling with the dry degermination system is a product like corn flour and semolina, germ for food use and for oil mills, by-products for zootechnical use. “The result derives from the Kalizea’s historical expertise, accumulated over 40 years in corn processing, and the strong commitment of our technical teams to make this Romanian production site a real technological model” stated Mr. Pierre Brotier, Kalizea’s Industrial director.