At the XVII International Forum on Agriculture and Food (19-20 October at Villa d’Este, Como – Italy), organized by Coldiretti, there was a great interest for the important economic growth and employment perspectives in the agri-food sector. Bonifiche Ferraresi success represents a development model to be imitated. 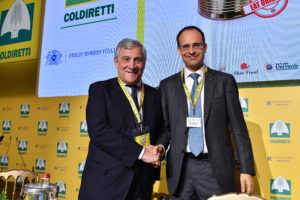 It’s difficult to summarize in a few lines the two-day speeches full of figures, development strategies and stimuli to face the complexity of the markets. The XVII International Forum on Agriculture and Food – chaired by Roberto Moncalvo, President of Coldiretti association – saw the participation of a large number of exponents of the financial, economic, social and institutional sectors in Italy and Europe. Expressing, in a nutshell, the common vision arising from this constructive forum, we can say that today the Italian agri-food supply chain is one of the crucial and unique keys to the country’s development. A new development model that become the advocate of values linked to reputation, sustainability, innovative technologies, environmental protection, food security, health and dialogue with the consumer. The forum took place on Friday, October 19 with the awards ceremony of the Oscar Green competition, promoted by “Coldiretti Giovani Impresa”, a recognition reserved for young entrepreneurs who have developed new ideas combining tradition and innovation in the agriculture. Citing Maria Letizia Gardoni – National Delegate of Coldiretti Giovani Impresa – “we are experiencing an enormous cultural revolution, probably the biggest in our country. We hold a very important record at European level as the country with the highest number of young people, under 35, employed in agriculture, and an annual 6% increase in new farms”. An important indicator to confirm how, in recent years, the relationship between agriculture, food and society has evolved, thanks also to the numerous projects and initiatives put in place by Coldiretti. Defending and protecting the Italian products quality and excellence becomes an essential imperative (as stated by David Ermini, vice president of the Superior Council of Magistrates) which requires an ever-increasing effort to intensify the fight against the mafia illegal activities in the agricultural and food sector and to fight the phenomenon of falsifications that it stands at around 100 billion euros. Today, talking about agriculture means highlighting the regenerative power that agriculture and the food supply chain have towards other productive areas, such as the booming festivals and markets of the farmer, food and wine travels, events based on the Italian excellence typicalities and the new alternative ways of consuming such as, for example, food delivery. (In the picture: left to right: Antonio Tajani – European Parliament President- and Roberto Moncalvo – President of the Coldiretti).

The Added Value of the Bonifiche Ferraresi Supply Chain 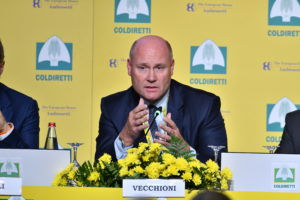 How to strengthen the systems for the commercial enhancement of our made in Italy agri-food industry? This is a complex challenge because the markets and the ways to bring together different production identities are complex. It’s necessary to make real supply chain agreements and Bonifiche Ferraresi, in just 3 years, has succeeded in what seemed an impossible undertaking. Federico Vecchioni – Bonifiche Ferraresi CEO – has illustrated this undertaking to the audience that attended this meeting: “three years ago Bonifiche Ferraeresi belonged to the Bank of Italy. If there had not been an idea and a project, the initiative of the only agricultural company listed on the stock exchange in the West, owned by Italian investors, wouldn’t have been able to generate what BF S.p.A. today represents. BF is the largest Italian agricultural production platform with about 8000 hectares located in different Italian regions and the only one listed on the stock exchange.” The BF project, which involved non-agricultural investors mobilizing € 510 million including both the increases in capital dedicated to the plan and underwriting of the floating, represents a unique entity, which believes in the power of production because, “Where there is production, there are conditions to overcome this catharsis regarding the political-economic-social world. The crisis of many worlds occurred because there were no more ideas. It’s necessary to explain what is behind Italian agriculture because otherwise we are measured only with EBITDA, which is an economic-financial data that the investor measures, but there is another guarantee element that is the land. I would not have found all these investors if I hadn’t had a trust element as strong as the land. The land gives confidence to the consumer, the distributor, the food industry and also gives confidence to the investor. So, it’s on this that we must measure the ability to be a platform for the made in Italy, to attract those functional investments and resources to make this “role of dam” towards the stronger economic colonization. I’m sure that the brands present in Filiera Italia together with BF will be able to do other operations to preserve the Made in Italy, attracting resources and carrying out projects”, as Vecchioni has stated. A concrete exhortation of Federico Vecchioni to create a large network of supply chains, to give space to strong relationships between economic and institutional operators, to support Coldiretti in its role of social link in the agricultural production world and, above all, an exhortation to give space to Italian genius through the implementation of good ideas and projects for supporting the growth of the Italian productive tissue.