AT SCHOOL WITH OCRIM SINCE 1965

The real flagship project of the company. In over 50 years Ocrim Milling Technology School has become an international reference point for the training of expert specialists. It represents one of the company’s main Customer Experience activities, a tool for spreading an innovative and sustainable cultural model. 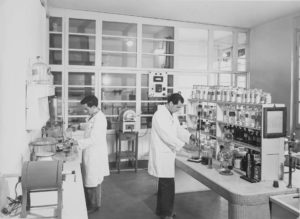 The establishment of the first “Technological School” dates back to 1965, when the Cavaliere del Lavoro (Recipient of the Order of Merit for Labour) Mr. Guido Grassi founded it in honour of his cousin and his main collaborator, the Cavaliere del Lavoro Mr. Luigi Grassi. Exactly in the 60s, Ocrim began to intensify its presence on the world market and this led to new investments and new strategic choices. One of the most significant was just the establishment of an international professional school of milling technology. The school was intended to prepare technicians and chief millers to lead the plants. The founder was in fact convinced that it was not enough to feed those who were hungry, but that it was necessary to teach them to cultivate better the land, to grind the wheat and to conserve the flour to get food. Originally the practical courses were held in the Ocrim workshops and the theoretical lessons at the Industrial and Technical Institute in Cremona. The growing number of adhesions led the company to give more concreteness to the training project and, in 1979, built its own school near Cremona. Later it was transferred inside the Via Massarotti headquarters, in a building that has been purpose-renovated. Already at that time the International School of Milling Technology achieved resounding success so much that the Alitalia monthly magazine, “Arrivederci”, dedicated an article entitled “Learning to make bread”. It’s still considered one of the company’s flagships. 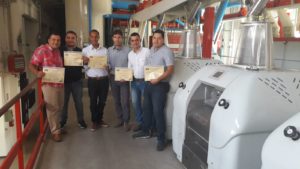 Ocrim organizes training courses for the milling sector both using its staff – project managers, chemists, technologists, chief millers, engineers and technicians – both of the collaboration of teachers and technicians from the American headquarters of the IAOM (International Association of Operative Millers). The school, equipped with a pilot mill with a potential of 24 tons per day, classrooms and a well-equipped chemical laboratory. Ocrim also makes available a guesthouse thus ensuring a pleasant stay in Cremona. The courses are attended by millers, mechanics, engineers, laboratory analysts, but also by neophytes in the sector who want to approach concretely the reality of milling, coming from all over the world to get the best training experience. It’s a social enrichment for those who attend it, including the opportunity for an intercultural exchange made of communication between different cultures, regions and ways of life. The courses are one to four weeks, up to a maximum of three months, and provide topics on everything that revolves around the milling world ranging from the analysis of the various types of cereals to the production of flour and semolina; from the management and maintenance of the plants, to the study of energy sustainability, safety and traceability of food products.