On April 11th, at the Fulgor cinema, Amarcord returned to excite an audience of 200 people. The film showing of the restored version was also sponsored by the GHIGI pasta factory who wanted to pay tribute to the Italian filmmaker supporting an event in perfect Fellini’s style, full of poetry, extravagant characters and … good Sangiovese wine. 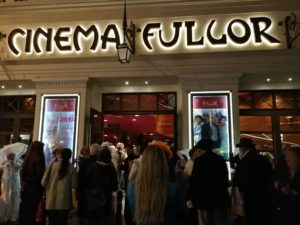 There was great awaited in Rimini for the film showing of the famous Amarcord, the masterpiece of Federico Fellini. Last April 11th, the whole city symbolically participated to the event, a breath of air in perfect Fellini’s style that crowded the streets of the historic center. Tourists and citizens are crowded in front of the Fulgor cinema. In the foyer, the audience was welcomed by Gradisca, Saraghina, Sceicco Bianco, Tabaccaia and other actors of the “Lele Marini” amateur dramatics society who played the main characters of the film, offering “piadina” – a typical Romagna territory flat bread – with porchetta and Sangiovese wine. The Fulgor cinema, returned to its former glory after its recent restoration (see the last post concerning this matter: http://www.ai-lati.eu/2018/03/05/happy-birthday-federico/),  was crowded and sold out, the tickets were “burned” in a few days. For the Rimini people that have watched the film in this theater, immortalized several times in the works of the Master, it was like entering into the plot of the film, being part of it and experiencing first-hand that immature and conformist little world told by Fellini. Amarcord, which won the Oscar as the best foreign film of 1975, is an iconic film, a historical and social cross-section, the masterpiece of an undisputed Master but also an emotional experience that the filmmaker, native of Rimini, manages to communicate to the viewer through his eyes. At first the film should have “É Bourg” (the village) title but then Fellini decided for Amarcord. “Amarcord is a bizarre word, a carillon, a phonetic somersault, a cabalistic sound, the brand of an aperitif … – he said – … if you combine love, heart, remember and bitter, you get to Amarcord”.

GHIGI pasta factory, and before that PAGLIERANI, has payed tribute to Federico Fellini. The act of sponsoring an event like this means, for business realities so rooted in the territory, recognizing oneself in the role of cultural witnesses and social aggregators. GHIGI 1870 S.p.A., despite its international dimension, is known by the people as the historical pasta factory (since 1870) of the Romagna hinterland and they are well aware of the bond and the exchange relationship that it has with this territory. The choice to participate, with other local organizations, as sponsor for the film showing of the restored version of Amarcord, is not only a mere tribute to a great Rimini filmmaker, but a sign of respect for the values and culture of a community of which it is an integral part.

PRIDE AND SATISFACTION AT IAOM USA