The talent and genius of Mario Sironi are on show at the AUGEO ART SPACE in Rimini. During the 2018 Design Biennale, a significant retrospective of the great Sardinian artist was opened on April 21st. He was one of the most eccentric, creative and fascinating character of the last century. Together with Umberto Boccioni and Fortunato Depero, he spread Italian Futurism in Europe. The exhibition “Sironi and the Contemporary” will remain open until June 2nd.

A Symbol Of The 20th-Century 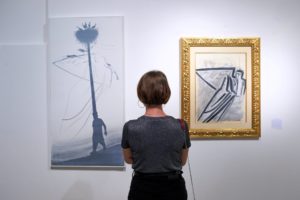 The great painting arrives in Rimini with a tribute to the Master, symbol of the Italian 20th-century. Mario Sironi (Sassari, May 12th, 1885 – Milan, August, 13th, 1961) was an Italian modernist artist who was active as a painter, sculptor, architect, illustrator, set designer and graphic designer; he was one of the most eclectic exponents of Italian art. His complex artistic personality made him protagonist, along with Boccioni and Depero, of the Futurist movement, then he was captured by the suggestions of the Metaphysics and, finally, he abandoned the easel painting to dedicate himself to the great decoration of the mural painting. The retrospective “Sironi and the contemporary”, opened on April 21st at AUGEO ART SPACE, tells about the story of the artistic career of the melancholic Master through 44 works, sketches, studies, drawings, tempera and magazines that reconstruct his complex and diversified activity. A unique 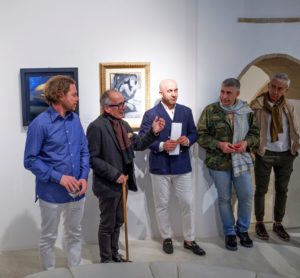 opportunity to learn more about an artist who was able to get out of the stylistic clichés and who, until the end, studied new forms of expression for his research. A genius to whom fate has not given the right recognition but who occupies a prominent position among the pages of the history of art. The masterpieces of Sironi are shown side by side by works of fourteen contemporary artists, who have chosen, each one, one of the Master’s work to which they draw inspiration for their own interpretation: Stefano Cecchini, Davide Frisoni, Luca Giovagnoli, Giovanni Lombardini, Filippo Manfroni, Stefano Ronci and Francesco Zavatta, Angelo Borgese, Mauro Pipani, Enrico Pambianchi, Massimo Pulini, Martinovic Svetislav Luigi Zino, Kiril Cholakov. The works of Mario Sironi come from the collection of the Galleria Cinquantasei of Bologna; the exhibition, promoted by AUGEO, ANGOLO DELLA CORNICE and CARTELLO RIMINI, will remain open until June 2nd. 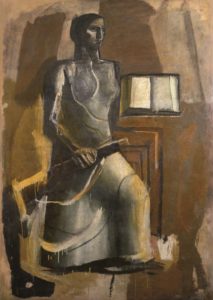 In 1937 Picasso participated with his famous “Guernica” at the Universal Exhibition in Paris. Next to it there was the large mosaic of Sironi, “L’Italia Corporativa” (Fascist Work), and when Picasso saw it, he was enthusiastic about it: “You have a great artist”– he said – “perhaps the greatest of these times and you don’t realize it.” He had warned us, but it took more than fifty years and a careful work of critical review to rehabilitate Sironi and understand that he was, and continues to be, one of the central figure in 20th-century European art, not much considered in Italy due to his artistic career influenced by the fascist regime to which he adhered.

WEAR THE HEADSET AND FLY TO THE AGRI-FOOD SUPPLY CHAIN!