The OCRIM R&D team, in collaboration with the University of Parma, has found the solution to fight cross-contamination phenomena and block the propagation of microorganisms within plansifters. The innovative product made by OCRIM has passed all the tests and has already been successfully tested by several customers. Further research is underway to use this technology in other strategic areas of milling plants. 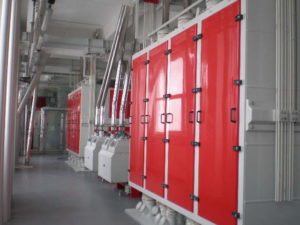 When cereals arrive to the milling plant, they can contain a series of physical, chemical and biological contaminations. In the specific case of biological contaminations may contain also human pathogen microorganisms that are naturally present in the environment where the cereals grow. There are different strategies to reduce and remove these microorganisms present inside the mill plant. OCRIM R&D team worked for long time to develop a product that could prevent cross-contamination between different batches of cereals, avoiding the proliferation of micro-organisms and, therefore, blocking the formation of new sources of inoculation in the mill. The new technology has been advanced starting from the sieving area and applied to the production of sieves containing an antimicrobial compound that counteracts the formation of molds and bacteria inside the plansifters. The problem was finding a material that, in addition to the

antimicrobial activity, had also other main features: compatibility with food usage, mechanical reliability and that could consent any mill to upgrade their machines. The solution is given by an innovative composite material that traps an antimicrobial ingredient inside it. The advantage is that this ingredient doesn’t be released into the flour during sieving, keeping the characteristics of the food unaltered, it doesn’t be consumed over time and therefore its effectiveness remains constant throughout the use of sieves. In the meantime, after the positive response of the customers who have already bought and tested this new product, OCRIM and the University of Parma continue their research activities to apply this technology in other strategic areas of the milling plants. 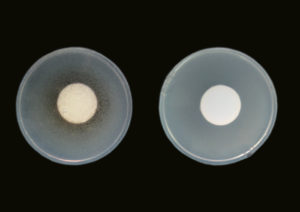 To ensure the antimicrobial effect of this new material, tests have been carried out to certify its antibacterial activity towards certain human pathogens such as Escherichia coli, Salmonella enteritidis and Staphylococcus aureus, (modified AATCC 100 method). ISO 16869: 2008 and ISO 846: 1997 tests were also made to demonstrate its fungistatic effect; ISO 16869: 2008 and ISO 846: 1997 tests were also performed to be sure that its activity was also effective against the fungal strains of Aspergillus flavus, Fusarium graminearum and Penicilium verrucosum which, developing in plansifter, could produce mycotoxins and release them in flours. The same ISO tests were performed also using round samples of multilayer wood, the material that is traditionally used to build sieves. As shown in the image (microbiological test) the samples of the two materials (wood multilayer on the left and new material on the right) were placed on a substrate containing microorganisms. After two weeks of incubation, microorganisms are grown around and on top of the wood sample (black dots on the left), while on the new material there is no growth.

GETTING READY FOR THE RIBBON CUTTING