From 24 November to 4 January, Augeo Art Space will host the solo exhibition of the artist Filippo Manfroni, native of Rimini. Fans of contemporary figurative art will be able to interpret the expressiveness of male and female bodies in the works that the artist often doesn’t entitle to leave space for the imagination of those who look at them.

The Evil Of Living In Filippo Manfroni Works

“I’m an attentive observer; the object of my attentions are people. I believe that in human beings there is a tragic difficulty in existing, an evil of living that is anything but romantic. From this state of mind, I try to tell the emotions through the figure that has always been at the center of my research and my attentions”. Thus, Filippo Manfroni describes his art, in search of an introspective language that can express human existence in its many aspects. His painting wants to dig into the “basement” of man; it’s an instrument to create, a way to synthesize, filter and show the wonder of existence, in all its aspects. One of the recurring themes in his works is the lack of communication between couples, the difficulty of living in everyday life, ending up leading parallel lives, unable to touch and talk to each other. A sense of inadequacy that the artist represents by sealing eyes and mouths or covering the face with masks and, at the same time, giving great strength and dynamism to the bodies, never static, that seem to float in a dreamlike dimension. In the contemporary context, figurative painting has sometimes been put aside, due to the advance of new expressive languages of a more symbolic and metaphysical nature. Filippo Manfroni instead recovers the sense of figurative Expressionism and assigns it the task of investigating the relationship between human 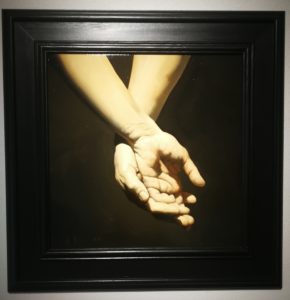 beings. A research started about ten years ago and spread through various exhibitions abroad and in Italy, in particular in Sardinia, in Ferrara and, more recently, in Saludecio, in his Rimini native land where he returned to live after a six-year-old Milanese pause during which he graduated in “comics”. In the exclusive spaces of the seventeenth-century Palazzo Spina in Rimini, which hosts the Augeo Art Space gallery, the setting up the solo exhibition of Filippo Manfroni, which will be open to the public from November 24 to January 4, is almost complete.