OCRIM CHARACTERS: giovanni schintu. THE MANAGER WITH THE SKILLS OF AN ORCHESTRA CONDUCTOR

On the occasion of the 42nd anniversary of the “Gruppo Lavoratori Anziani” (GLA) of Ocrim, literally Senior Workers Group, we would like to pay tribute to Giovanni Schintu, founder of the Association and unforgettable colleague. He supported Guido Grassi during the company industrialization and for 40 years he had been spent himself with great commitment, showing off unique organizational and social skills. 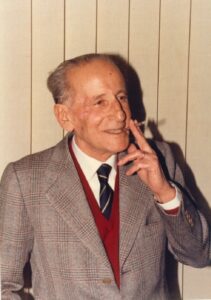 Giovanni Schintu was on his way to the most enviable career in Alfa Romeo when Guido Grassi met him and, enchanted by his managerial potential, he did whatever he could to bring him in Ocrim. Born in 1919, at the age of 16 he graduated in Mechanical Engineering and was hired by Alfa Romeo in Milan. Here he had the opportunity to attend a prestigious training school and learn about the most innovative business strategies. In 1938 he left for military service in the Royal Navy and he kept offering his service to the country on Second World War until 1943. At that time, Alfa Romeo also built engines for aircrafts and war vehicles and was able to call him back to service by imposing his discharge. In few months Giovanni completed his evening studies and was elected in the Company Council as representative of the over seventeen thousand employees. Also, he will be one of the organizers of the underground liberation movement inside the factory. In the meantime he married Stella Bonzanini (1944) and from their union Alberto (1946) and Franco (1949) will born.

In 1946 he left his Alfa, to which he will forever be emotionally attached, and started his adventure within Ocrim industrialization, practicing cutting-edge organizational models. Guido Grassi was right. Schintu’s contribute came up as deciding in rearranging the offices and in planning works, costs, times and methods, testing, warehouses, foundry and workshop. Later on, in 1959 he took care of Purchasing Office and was promoted as Manager being responsible for handling all the plant production activities, showing off the skills of a conductor. He use to have a natural ability in what now is called “change management”: he knew how to face and deal with economical, social, technological and regulatory changing, with a practical approach. He always kept his bonds with Guido Grassi and Giuseppe Spinelli strongly and productive, he was a well-prepared, loyal and tireless colleague, a gentleman, a golden oldie, appreciated and respected by everybody. He also spent himself to promote locally and nationally the Industrial Executives Union. In 1976 he finally retired, but he never cut his bond with Ocrim: he kept serving as a consultant to support the management of the company in hard times; the following year he was honored with the deserved title of “Master of Labor”. He disappeared in 2003, leaving quietly and discreetly as well as he had spent all his life.

Giovanni Schintu gave life to the Senior Workers Group in 1978 to whom he will be the first President. An annual opportunity for former Ocrim employees to meet and talk about the past but also to proudly share the achievements of the company to which they are still emotionally attached. Today it’s a special day: it marks the 42nd anniversary of the foundation and the current President, Franco Schintu, has announced that celebrations will be postponed due to Covid situation. However, institutional and official appointments are respected: right this morning at h. 9.30 am all GLA members will meet at Cremona graveyard for the traditional visit at the tomb of Sir. Guido Grassi and of all deceased Ocrim employees. The last tribute is to Fausta Grassi, in Cavatigozzi greveyard. After that, a religious function in San Bassano Church will take place. By these words, Ocrim sincerely would like to thank President Franco Schintu for his tenacity that keeps alive the memory of many beloved colleagues.