The collective exhibit of the most famous international masters of photography was held at the Augeo Art Space. It is the tribute that Paglierani company wanted to offer to the city of Rimini to celebrate the birthday of Federico Fellini. Among the events scheduled for the occasion also the long-awaited reopening of the historic Fulgor cinema, immortalized in the”Amarcord” film.

The Party Started At The Augeo Art Space…

“The night of dre 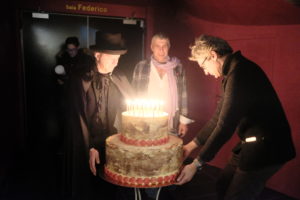 ams, happy birthday Federico” is the title of the artistic kermis held on 19 January at the Augeo Art Space, an event dedicated to art, music and taste, sponsored by Paglierani company in honor of Federico Fellini. The contemporary art gallery remained open after midnight to allow the public to visit PH Neutro international photographic collective exhibit with free admission. A unique opportunity to admire the works of internationally renowned artists and authors represented exclusively on the Italian market. It wa 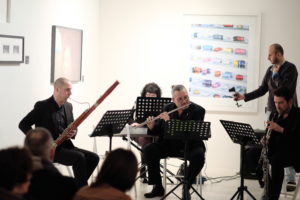 s an event populated by magicians and a colorful human gallery, in perfect Fellini’s style. The evening, started with a cocktail party, curated by the Lola Langusta cultural club and accompanied by a musical selection created by DJ Luis Ferri, ended with a live concert by a quartet of the Gan Eden association that performed the most famous songs, composed by the maestro Nino Rota for Federico Fellini’s films.

…And It Is Continued At The Fulgor Cinema. 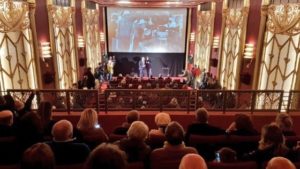 day after, 20 January, the “Maestro” would have turned 98 and for the occasion the Fulgor cinema was inaugurated, a historic hall of the early twentieth century, made famous in the world and immortalized by Fellini in “Amarcord”, a 1973 famous film. The opening ceremony was attended by: the actor, Sergio Rubini, the granddaughter of the Maestro, Francesca Fabbri Fellini, committed to protecting the name and image of the uncle, the set designer, Dante Ferretti, who oversaw the new staging in the 30s style, the Minister for Cultural Heritage, Dario Franceschini and the Mayor of Rimini Andrea Gnassi who stated: “It isn’t just a room, it’s Fellini, it’s a magic … it’s a great place in Italian culture that reopens”. The program, in addition to the showing of the best latest film releases, includes film festivals and restored classics. The cinematographic proposal of the Fulgor will also be dedicated to the “Maestro”, not only with retrospectives dedicated to his vast cinematography, but also to the films of the directors who have influenced or have been appreciated by Federico Fellini; to the films of the directors who are his contemporaries and who have been most influenced by him. In the authoritative New York Times’ ranking, the Fulgor cinema has been included among the 52 destinations in the world to visit in 2018.