THE DEEP-ROOTED CULTURE OF EXCELLENCE

Ipack.ima 4. The strategic vision of the founders of OCRIM and PAGLIERANI sowed the seeds of excellence that have been shared and skilfully cultivated by the following generations. A goal that evidences consolidated growth in global markets through outstanding figures: 163 years of life, 700 employees, 160 million Euro of turnover. Live streaming from 3pm: http://www.ocrim.com/site/stream.html 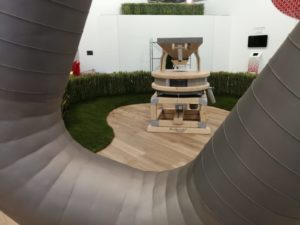 Turning customers’ needs into technically perfect and cutting-edge machinery is only one of the aims pursued by OCRIM and PAGLIERANI. And to do so, the two companies use a combination of principles, tradition, research, technology and artistic inspiration forming a culture of excellence with deep roots. The history of the success of OCRIM and PAGLIERANI stems from the philosophical choices of their founders, respectively the Grassis and the Paglieranis, whose far-sightedness laid the foundations of a work ethic that has led them to their current standing as global players in their respective sectors.  The advantage of those enlightened beginnings – as opposed to the prevailing approach at the time – was cultivated, enriched and fully brought to fruition by the subsequent generations who, in keeping with those founding principles, turned it into outstanding figures: 700 employees, 160,000,000 Euro turnover, 163 years in business – tangible expressions of the greatness of the two companies. Thanks to the ability of the Antolinis – the second generation who took the helm at PAGLIERANI – the history of the two companies intertwined, bringing fresh technological and engineering perspectives and a novel approach inspired by Italian art and culture.

The culture of excellence cannot overlook art, which is essential to nourish mind and soul, as exemplified by the painting displayed at the booth, “The torture of Sisyphus watched over by Thanatos and Hypnos” (1630 approx.), belonging to the School of Jusepe de Ribera AKA Lo Spagnoletto. 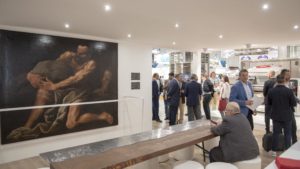 Most likely painted by Francesco Fracanzano, the canvas offers a rather original version of the myth. Sisyphus, a crafty and cunning man, was punished for his self-aggrandisement, having sought to exceed his human limitations and dared to challenge the gods, thus committing that terrible sin of arrogance defined as hybris by the ancients. He was therefore inflicted this eternal torture – collapsing under the weight of a boulder that is seemingly impossible to lift while being tormented by two monsters. This painting was ahead of its time, as contemporary artists focused on frantically seeking new ways of depicting the human body to express feelings and the motions of the soul they arise from.

THE GREAT DREAM OF A GREAT REALITY